What’s the problem with non-stick pans, anyway? You might have heard that we need to swap them out, but why?

Teflon is part of a group of toxic fluorinated chemicals known as PFAS. These are a class of chemicals often referred to as ‘forever chemcials’ as they build up in the body as well as the environment. PFAS are associated with multiple adverse health effects, including immunotoxicity, endocrine disruption, cancer, as well as developmental and reproductive toxicity.

But back to Teflon. When heated at high temperatures, Teflon coatings can begin to disintegrate and send particles into the air. These toxic fumes from the Teflon chemicals, cause people to exhibit flu-like symptoms (called “Teflon Flu” or, as scientists describe it, “Polymer fume fever”). When scratched and agitated, parts of the Teflon coating may chip off into food. One new study by the Society of Environmental Toxicologists and Chemists, links Teflon to higher levels of prostate cancer in men and cervical and uterine cancer in women.

Thankfully, PFOA has been banned by the International Agency for Cancer Research as the evidence mounted. Now however it has been replaced by something called GenX. There is limited information about GenX as it is such a new technology, however the EWG says preliminary research shows it may be nearly as toxic as the non-stick chemicals it replaced!

I don’t know about you, but that’s enough to make me want to look into safer alternatives. 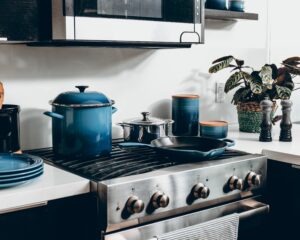 So what is ‘non toxic’ cookware and what should you look for?

When looking for a nontoxic pan that doesn’t lead to any adverse health effects, these materials should top your list.

Cast iron, enamelled cast iron and wrought iron: Cast-iron pans, made from iron and a small amount of carbon, are naturally nonstick when properly seasoned. Incredibly durable, most have lifetime, if not multi generational warranties, the only downside is cast iron can rust if not properly cared for. Cast Iron can leach tiny amounts of iron, which is actually not harmful as many people are deficient in Iron. Enameled cast Iron like Le Cresuet doesn’t leach anything at all but is more expensive.

Glass: Completely safe to use in the oven, great for baking, less expensive but not great at holding or distributing heat when used on the cook top.

Stainless steel: These untreated metal pans are non toxic, distribute the heat evenly, but are NOT non-stick, so make sure you use a healthy oil or fat when cooking.

Ceramic: When choosing ceramic, typically they are safe, however purchase from a distributor who is transparent about where their ceramic comes from—as it could contain harmful heavy metals like lead and cadmium. 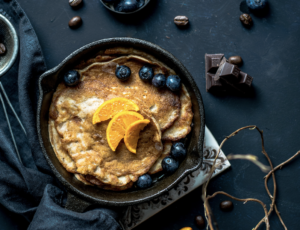 Aluminium cookware: known for toxic leaching of Aluminum when used for cooking, especially with acidic food such as tomato sauce. Aluminum is a neurotoxin which is linked with Alzheimers disease and auto-immune conditions.

Copper cookware: can leach copper, which isn’t necessarily toxic, but can be in high doses. It can also reduce your levels of Zinc as it competes with absorption.

Silicone cookware: in my opinion, there hasn’t been enough scientific research to confirm if silicone can leach out of cookware, however it’s fine to use for kitchen utensils (and much better than Teflon!).

BRANDS I RECOMMEND (available to purchase in NZ):

Wrought Iron: Made from one piece of iron and a lot lighter to handle (in comparrison to cast iron): Solidteknics I have a 26cm AUS-ION that I adore.

Enameled cast iron: Le Creuset. I use a fabulous dutch oven from these guys. Chesseur is also good.

Stainless Steel: I like the Scanpan stainless steel range

Ceramic: Xtrema Xtrema’s 100% ceramic pots and pans are made of all-natural materials and have been proven not to leach toxic metals.

I hope this has been helpful! If you’ve got any questions, reach out.